Edit
For other articles with related titles, see Warnorken Arena. 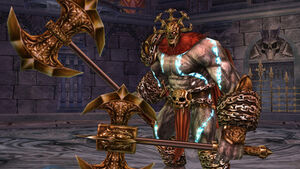 The loot for each boss will appear in an Arena Loot chest after each fight.

Weapon, Gloves, and Leggings dropped by Bosses in Warnoken Arena:

The Belts are sold by Galor Pringle at Kandor.

None. You are led directly into the Arena to face the bosses.

The standard strategy is to use DS priest skill for the jump. Should be timed to go up at 80% of cast bar when dragon is up.

Hits nice on tank (11k-15k on level 60) plus random hits on other party member. What is important that everybody stays behind tank (and not between tank and dragon). Similar to Andriol in HoS.

I think the best boss in WA. Does damage on tank + lot of AoE (like 3-4k per tick) and a couple of short term debuffs (like knock down). It also has a stacking debuff which reduces your all your abilities.

The special part is when he "pulls everybody to himself" and starts an 4 second cast. You need to run away (good reflexes and no speed buff it is easily possible) or you take a 90% HP hit followed by one of his favorite Aoe DoT's. You can also take the hit and use phiri and survive (some lazy priests always take the hit.

Tank & spank and healer's boss. Tank turns away rest dps from behind.

She has 2 different DoTs: the green one and the red one, they both reduce healing by 75% and deal 4k damage over time. To remove the red DoT, players need to stand together (very close, same pixel even), to remove the green one they need to spread out.

It also has stacking buff that increases aggro of party members (vs. tank) but for a good tank it should not be an issue at all. Otherwise ppl need to watch aggro.

This is the messy fight category. The boss has a couple of special abilities:

Strategy: tank should slowly kite the boss around the room always watching the position of others (especially healers) to make sure there is room for them to move. Nobody's rum is STILL breaking the SP cast by the boss - so it is advised for the tank. Priest should really try to avoid the circles - tank can stand it with mana return, phiri pot and good healing.

There are multiple strategies:
1. Tank takes them both.
2. Someone off tanks.
3. Scout kites lady.
In all case recommended (at least we do) to kill man first.

What i have observed that in case you use two tanks (either off tank or scout kiting) the bosses will debuff the tank of the other.
If tank is on Man - will get the red rose debuff (less healing)
If scout is on Woman - will get the circles.

The good news is that circles disappear - so the room is less messy and better for kiting.