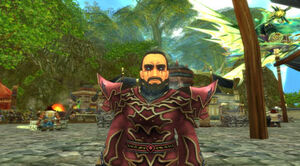 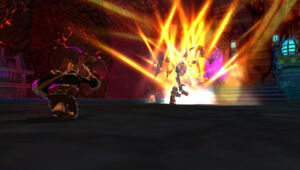 The following races can choose the Warlock class: Dwarf

Warlocks are a magic-based ranged damage dealing class. Many of their abilities cause damage over time in addition to direct damage. Unlike other casters, Warlocks use Focus as a resource. They can project powerful soul shields on their allies or buff their souls. Moreover, they can subdue the souls of their enemies; weakening or filling your heart with fear and doubt.

To flatten the high damage rate, the Warlock uses two very limited pools of fuel for his spells: Focus and Psi.

You have a never-changing pool-size of 100 Focus points. It regenerates fairly fast, and some skills actually increase this regeneration speed. However, the pool size severely limits the length of your primary combat sequence. For this reason it is highly recommended that

Warlocks take up the profession of

Potion of Focused Will).

Some skills also add Psi to your 6-bubble Psi gauge. Psi (sometimes called Soul Points) is used to power all of the special attacks unlocked by

Willpower Construct (Buffs). The gauge fills slowly over the length of a fight, and wise Psi management is very important to your overall utility to party and raid forces.

All classes need Stamina to increase their HP. Dungeon bosses often have area attacks that can kill players who neglect this stat.

The warlock builds energy influx (or Psi, displayed on your UI as 6 bubbles under your health, focus, and mana bars) and then uses this energy to perform incredibly devastating attacks. Because of the slowly-building nature of psi it is doubtful you will ever use these skills without a Boss fight and a full party.

You build Psi energy by using skills such as Psychic Arrows (1 Psi) and Puzzlement (2 Psi). When your Psi counter contains 6 green charges, you may use this energy to invoke

In general Warlocks have synergy in more ways: