This was announced on 6/17/2022 but has not actually started. This is a GM event and will take place at different times on different servers. Dates by Server are in a table at the bottom of this page.

See Category:Time Travel for a list of all pages related to this event.

For eons, Sismond hid alone in his castle and meticulously devised a plan of vengeance.

His top priority was to track down the traitors, who had thwarted his plans to occupy the “Valley of Glory".

He was told that the Kingdom of Dalanis is a treasure trove of knowledge, although obtaining the information he so desired would not be an easy task.

Step by step a dark plan takes shape in his black heart. 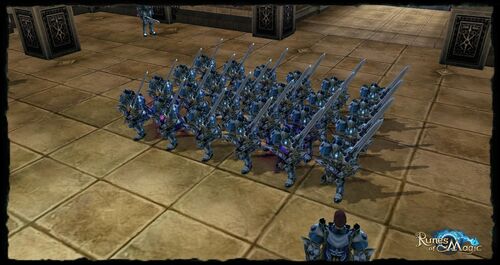 Ages passed before the two gained the trust of the Guard’s most important members, and they were told how Sismond’s plans were thwarted that fateful day so long ago. When they heard that an important battle took place that day, their hearts were filled with curiosity.

It was Naleya the Elf who had noticed that Sismond was near that night, and she alerted the Lion Heart Guard with her calls of alarm.

She has been under their protection ever since.

The King of Dalanis gave the two new knights the task of protecting Naleya, so the two went to her home in Shador.

After arriving there, the two quickly found their target. They lured Naleya out of the city by telling her that she was expected in Dalanis– which of course was not true – but she would find this out soon enough.

After packing up a few things, she set off with the two guards and left Shador. 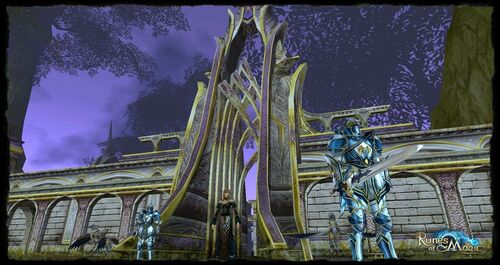 After traveling for some time, she was alone with the two guards, very far from home... or at least so she thought.

Suddenly, a portal opened up in front of her, from which Sismond arose.

Naleya stopped, frozen in her tracks. He grabbed her and dragged her through the portal, thanking the guards as it closed behind him.

The two knights remained behind and returned to Dalanis, where they would lie to the king.

“We were walking with Naleya and suddenly a portal opened and a terrible creature grabbed her. Believe us, we tried everything to save her...”

After a long interrogation, the king had determined that the two were lying to him, so he had them locked up in the deepest dungeon.

The king gathered the council.

Days passed before they finished deliberating about everything that was needed to bring a plan into action.

"Sismond has dragged Naleya into a time which is not our present time."

Toni, Morrok and the Lion Heart Guard are ready to free her. However, the preparations for this will still take some time.

To avoid any questions and prying eyes, the plan is being moved – to the City of Varanas. So they set out to make the journey. The most talented magicians from Taborea, who have been toiling away on a secret project for some time, have been recruited to help the king in making his plan a reality. For these magic users have been working for years on researching one thing in particular – how to open up a rift in time.

Obviously, we are assuming they will do this again in the future, so we are leaving room in the table for adding future years of dates.