Double Your "Dailies", Double Your Drops! - On all, or very nearly all, of the Daily and Public quests that require Quest Drops from Mobs, if you have both repeatable quests in your Quest Journal at the same time the mobs will drop Double the items, cutting your harvesting time in half! This may be considered a bug or exploit by some, but I like to call it a feature. See Category:Double Drop 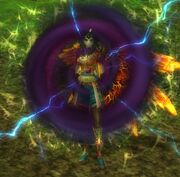 Whenever you fight a member of the Inexorable League in this zone, and you are his target, an effect will appear around you, a swirling purple vortex with electricity around the borders. We have never seen an Effect icon appear but have noticed an occasional Stun effect that might be related. We simply do not know for sure. Only the mob's target will be so marked.

Complete all of the above to gain the title Tasuqian Pioneer

All Normal and Good item sets sold, found, or crafted in this zone share the same appearance. The Common Glorious item set is the only exception.

Much the way it was done in Moorlands of Farsitan, you must progress the questline in The Spirits of Despair quest series to unlock sections of the quests in the Tasuq quest series.

unlocked by completing Ambushed! in The Spirits of Despair quest series

The following quests either start or take place within the Vale of Rites Dungeon Instance. Consider this a checklist for when you are ready to go there.