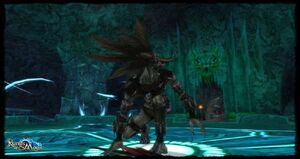 The first quest to lead you to Madro Troll Nest is [97] The Troll Nest from Dolha Bloodaxe [Sandalor Scout] in Sandalor.

The following quests all require you to do something inside of Madro Troll Nest.

According to Saito Hajime, he is NOT secretly a ninja, despite the fact that he has half the HP of the previous 3 bosses. A decent (not even uber) group should be able to just tank and nuke him til he glows. However, as he only appears in Hard Mode, you will need a good 12-man raid simply to survive to reach him.