Runes of Magic Wiki
Register
Don't have an account?
Sign In
Advertisement
in: English Pages with Translation, Public Outdoor (Zone Type), Rise of the Demon Lord,
and 15 more

This page is in English, but other language translations are supported (see flags to right).

The howling mountains were once inhabited by lesser demons who met certain nights in a barrow. During these nocturnal ceremonies, the demons were doing some strange sacrificial rites, the cries of their victims eventually give their name to the howling mountains.

Some years ago, the Council of Varanas and the Eye of Wisdom have jointly pushed away the evil creatures of the region, the screams were silent when the first humans settled in the mountains. Since that day, travelers and adventurers cross the mountains with tranquility despite the strange feeling of dread aroused by the sharp rock formations.— from us.runesofmagic.gameforge.com 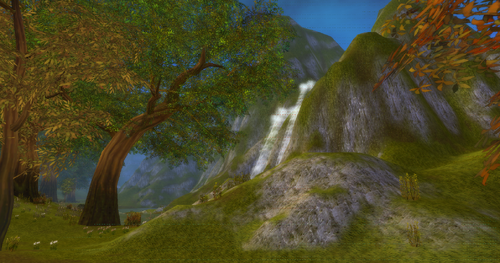 The Pioneers Mine is located to the west of the Pioneers' Colony, it's the most recent and smallest excavation area of the howling mountains. Although shallow, it supplies zinc ore to the region.

In the idyllic scenery of the Howling Mountains the Council of Varanas build a base. With its clear lake and its picturesque waterfall, its proud forests and newly discovered veins of ore the Pioneer’s Colony is rich in both beauty and raw materials.

A small mine to the west of the village is the newest excavation area in the region. After mushroom-beings in great numbers appeared all of a sudden “Silvershadow” sent out many young adventurers to settle the matter and help with the mining so that the region might prosper.

The Hidden Valley received its name because of its hidden location. In all four directions this deep-set region is surrounded by towering mountains.

This is why the Hidden Valley was only discovered after the adventurers guild “Silvershadow” was looking for the sources of different bodies of water. In addition to one of the springs they also detected traces of ore. To mine the ore the Council of Varanas founded the Pioneer’s Colony.

After the founding of the Pioneer’s Colony the mine yielded a steady supply of ore for years. It did not take long though before a band of Goblins launched a surprise attack. They even brought cave crabs with them as if to publicly announce that the ore was now theirs.

In light of the goblin’s attack and the crab’s furious digging, the mine’s stonewalls became loose. That was the moment the humans decided to abandon the mine in order to focus on the ore vein to the west of the settlement. This was a temporary measure until all goblins and cave crabs could be driven away.

A small barnyard in the Howling Mountains is operated by the peaceful Helen. Alongside the breeding of some cows the peasant woman also plants vegetables. For the neighbouring settlement of Logar she is an important supplier of day-to-day foodstuffs.Even though young bears and wolves in the proximity of the farm worry Helen, she does not intend to strengthen her defences. All that she wants is to live in harmony with her surroundings.

For the past couple of years, Logar has been becoming more and more famous. Since the Council of Varanas decided to exploit the nearby mines, humans have performed some great wraith expulsions helped by the Eye of Wisdom. After the affirmation that the area was safe and sound for human settlement, a group of highly trained citizens were chosen to make this new region accessible.

Their leader was called Logar. In the battle against the demons he decided to protect his companions by sacrificing himself, falling alongside the demons he fought. As a reminder of his heroic deeds the settlement which was later founded bore his name. Logar’s younger brother is now the mayor of this town.

The settlement has a great windmill which grinds the corn of the neighboring farms. Because of the windmill's importance in the everyday life of Logar’s citizens, it also became its landmark. It is common knowledge among all travelers that when the windmill can be seen, Logar lies directly ahead.

This landscape links the Barrow to the Moon-Spring. It is from the boulders and rocky debris which lie about that the Crushed Plain received its name. At the same time, the Crushed Plain serves as an important transportation intersection from the Howling Mountains to the far away outskirts. Nearby, a squad of the Varanas Guard set up a camp to ensure the safety of passing travelers.

The magical Moon Hills are a plateau of limestone cliffs which emit billowing clouds of steam. A long time ago a wanderer travelling at night saw the reflection of the moon in the waters of a spring. He thought that he might find treasure, but the moonlight guided him to this place and it is for that reason that the spring is now called Moon-Spring.

There is another magical relevance to this place: At the time the Howling Mountains were still the home of lower demons, they did not dare to venture into the Moon Hills. It is rumored that this may be because of a mighty enchanted creature dwelling in the Moongorge, which lies deep in the mountain range.

At the entrance to the Moongorge, you will find Kants and Telyle Maymof. These are members of the Phirius Workshops. They sell special rare recipes for level 55 and transform some rare materials from inside Cave of the Water Dragon into other, rarer materials needed for these recipes.

It is a steep vertical vale, which water carved out of the limestone and is situated close to the reservoir where the water flows. On the inside the Moongorge is full of stalactites and stalagmites, while the turquoise water flowing there reflects violet light-spots. The touching atmosphere and the outlandish beauty of the scene resemble a cathedral of nature.

According to legend the Moongorge is home to a mighty being, so terrifying that even demons feared it. No-one has ever dared to venture into the deep to take a glimpse of that creature.

The wild forest lies eastwards of Logar and in the ancient language, Sevaida means “Power of Aeons”.

A bard, accompanied by the mayor of Logar once came to this forest and when he saw the Dead Tree with its cave deep in the woods, he was deeply touched and praised it as a symbol of ancient and mighty power. For that reason the mayor proposed to call this place Sevaida.

In the Sevaida Woods stands a towering, white, weathered tree trunk with a natural opening in it. This hole is linked to an underground cavern. Just like the mysterious environment gave birth to this strange plant, it also created other strange life-forms.

It was this cave where Logar the hero fought the spider demon Pirlanok. After Pirlanok was defeated, legend tells that he was banished into the white trunk where he drinks the power of the forest and awaits his resurrection.

The Barrow is an elevated place framed by stone columns. The slanted remains of stone columns and great boulders lie about everywhere – just like in the Crushed Plain. This was the place were demons formerly performed their sacrificial rituals. The ancient, monolithic stone formation is at its center.

Even though humans already settled in the Howling Mountains, for some reason a group of kobolds banded together to drive them out. Their surprise attack was successful and the humans settled elsewhere.

Originally the Barren Caves were a breeding ground for demons in the Howling Mountains. After the demon’s annihilation, the caves were abandoned and are considered to be cursed. Normal people avoid them at all costs. But lately a group of nearby kobolds started to move and claimed ownership of this place.

Nobody knows why they began to act all of a sudden, but some suspect that they are looking for left-behind treasures and magical objects, which were hidden by the demons – a valid assumption considering their habits.