Heart of the Ocean (Zone)

Edit
For other articles with related titles, see Heart of the Ocean. 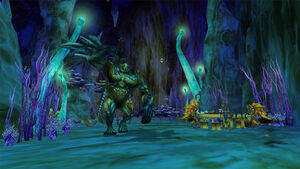 The gentle light and mesmerising jellyfish, rays and Ayams may entrance you, but don’t let yourself be distracted. This underwater instance requires your complete attention, with venomous tentacles and sharp-toothed creatures lurking about, not to forget the five bosses who will stop at nothing to destroy you.— from us.runesofmagic.gameforge.com

(The following has been tested with two characters. No other Weeping Coast quests than the quests and quest lines described below have been completed with these characters before and during the tests.)

Before you can enter Heart of the Ocean, you need to complete the attunement quest. This quest is called Obtain Blessing. But before you can actually obtain this quest, you first have to complete two quest lines.

The first questline is a long one. According to runesdatabase.com it's actually two quest lines. So, in this guide I will also assume that it's two consecutive quest lines. In total, you have to complete 22 quests.

The first sub-questline starts with Noxi B'shao in Boulderwind Village. Auntie in Danger! is the first quest. This questline will take you to the Ayal, Ayak and Ayat clans. It will teach you about what's going on with the Tiktaalik. It ends with the quest Fully Entrusted. A short cutscene of a patrolling Varanas guard warning Dilar Yeli that he's in Tiktaalik territory marks the end of the first sub-questline.

Please note that after completing Take what you deserve the next quest is Investigation, received from Mavate Daviny. If you follow the questline above you can't get lost.

The second sub-questline starts with Dilar Yeli. The first quest of this questline is Priceless Treasure. This questline will take you to the Ayal and Ayak clans. It will introduce you to the Heart of the Ocean and Medusa. The last quest of this quest line is called Response to the Investigation. A short cutscene of Dilar Yeli returning to the village marks the end of the "second" quest line.

Please note that after completing The World in Books the next quest is Research Analysis, received from Dilar Yeli. If you follow the quest line in the link above you can't get lost.

The second questline is not that long. In total, you have to complete 12 quests.

This questline starts with the Ent Yilian Zashu who is located just north of Boulderwind Village on the road to the Throne of the Water. The first quest is called Song of the Forest. This questline will take you to the Ayam clan, the Throne of the Water and the Muttering Forest. It's also supposed to be your first encounter with the Naga. It ends with the quest Hidden in the Forest which has to be completed with Yilian Zashu.

Here is a summary of the quests you need to do:

Now that you are attuned, be sure to pick up the following quests before you enter Heart of the Ocean the first time.

Up to boss three, you will encounter these mobs:

When fighting the groups of mobs you usually want to kill the Ayat War Drum Priest first because you can pull this out of the group without aggroing the other mobs in the group and on normal mode they buff the mobs around them. Once you pull the groups you would normally focus on the healers first and then any mob that may fear or stun you. Also the Fish Trainers seem to hit much harder than the other mobs so be careful when you pull these.

After Boss #3 you will also see:

During this fight the tank has to turn the boss away from the rest of the party because the boss has a heavy frontal magical AoE called Splinter Magic. The rest of the party will have to stand behind the boss. At certain times during the boss fight three adds will spawn, two horseshoe crabs and one jellyfish. The damage dealers have to take down these adds, else the party will eventually wipe bcause of too many adds. Also at random times during the fight stationary jellyfish will spawn which have a blue aura around them. This blue aura will drain your mana so healers and other mana users should move away immediately. When the adds are up, DPS should be on adds. Once the adds are dead, the damage dealers should be DPSing the boss. Stationary Jellyfish cannot be killed, so just ignore them.

This fight is pretty simple if the tank keeps the boss turned away from the rest of the group.

Teeth of the Reef

Teeth of the Reef (56 Crown Elite)

This boss fight is easy if you have a mage in your party.

This boss does not have any AoE attacks so you can safely stand near it (which you should do). At a certain point, the boss will put the Big Ripper debuff on everyone which will take 35% HP every 2 seconds. It is important for everyone in the party to not have to much HP, because more HP means higher hits. You can reduce your HP by cancelling buffs or by taking off equipment. The healer in the group must be able to heal every party member to full health with group heals. The boss will also put a debuff on the healers that will make them cast slower. It is rumored that Nobodies Rum will get rid of this debuff. But, just in case it doesn't, make sure the healers have increased spell casting speed food with them and clear thought potions from their housemaids.

Every some seconds, the boss will cast a small DoT on a random player. When this DoT expires, Little Fish will spawn around the player. These adds are very annoying and time consuming to kill if you are a single target damage dealer. The best way to deal with them is to take with you a mage or any other class which has high AoE DPS.

Broken Harpoon to start the quest [52] Legend of the Teeth of the Reef.

When Jiasha is pulled, the doors of the room will be blocked by giant jellyfish, so you can't run. People who are outside will automatically be transported inside the room. Jiasha does not have any special offensive skills. She will just hit the tank with normal attacks.

Throughout the entire fight, the party will "choke" and lose 10% HP every two seconds. This can be countered by stepping in the bubble areas that appear randomly around the room. Anybody who is outside of the room will die slowly, because there are no bubble areas, so don't enter the instance while this boss is being fought.

At a certain point, lasers will shoot across the room. Touching the lasers is not harmful. However, after a while, heavy water streams will flow through the room, following the same path as the lasers. These water streams are deadly, so stay away from them.

Also this boss will randomly put a slow and bleed on the party.


Before pulling Jiasha, stand on the edge of the room and wait for a pack of bubbles to spawn near the entrance of the room. When the bubbles appear charge in as a group and run though the bubble pack to become immune for a short period of time. Tank will grab aggro on the boss while the rest of the group heads to the left to a little purple tree thing. Lasers will never go through this tree thingy, so you're safe from those here. Once the tank has aggro with one or two hits, he will join the rest of the group in the purple tree left of the entrance of the room. You can just stand here and tank and spank the boss. Healing may be harder with this strategy because bubble packs won't spawn here, but you wont die from the lasers.

In addition to the previously mentioned mobs, you will also encounter two new trash mobs:

Geba is a fairly simple fight because he only has two special abilities. Be sure to clear out the room before you start fighting Geba. You do not want to aggro any extra mobs! Geba has a really long patrol path, which means you have decent time frames to clear the room. Beware though! He moves alot faster than you might think!

This boss is mainly a tank and spank fight. Just keep an eye out for his casts. When he casts Whirlwind Counterattack, everyone near the boss MUST run away, even the tank! This attack is very lethal! You can go back once the cast is over.

When he casts Geba's Magic he will spawn a clone of himself which is much weaker. A damage dealer has to off-tank the clone. The clone doesn't hit too much, so the player should be able to survive. Once the close is down, go back to fighting the main boss.

Up to the fifth boss, you will only encounter the following mobs:

Medusa will have three buffs active at the start of the fight. Also, three stone soldiers can be clicked as soon as the boss is pulled. I will tell you later how to get rid of these buffs. Pull Medusa to the middle of the room and fight her there. The damage dealers should hold their DPS and let the tank build aggro, since Medusa heals herself for 3% HP every 2 seconds. Throughout the fight Medusa will put the debuffs Rock Bind and Petrify on party members. If a player is affected by Petrify, the rest of the party has to target the rocks that have appeared around this player and "kill" them. The rocks have very little HP. If the rocks are not killed before the debuff timer expires, the player will be stunned for 2 minutes. This cannot be undone, so keep an eye out for this ability! The player himself can also target the rocks and kill them.

After Medusa has cast Petrify three times, she will start the long cast (Summon Sound Shell) and a Sound Shell will appear in the room. Now, the damage dealers should attack Medusa and deal as much damage as possible. If enough damage has been dealt, Medusa will stop the cast. The Sound Shell can now be clicked by a player. The player who clicks the Sound Shell can now "unfreeze" one of the three stone soldiers. The released soldier will shoot an arrow at Medusa and remove one of her debuffs.

After Medusa's Summon Sound Shell cast has been interrupted, she will cast Petrify again three times and the circle repeats. After the third Sound Shell, Medusa will no longer cast Petrify or summon another Sound Shell. If you have failed to release all three stone soldiers, the leftover buffs cannot be removed anymore.

Medusa has gained a new ability instead of Petrify and Summon Sound Shell: she will put a DoT on the party which stacks over time, dealing more and more damage. Also, non-elite snakes will spawn regularly. When the snakes "bite" a player, the DoT on this player will be cleansed. But, beware! After a while, these snakes will morph into elite snakes. So you should use the non-elite snakes to cleanse the DoT and kill them immediately. This tactic has to be repeated until Medusa dies.