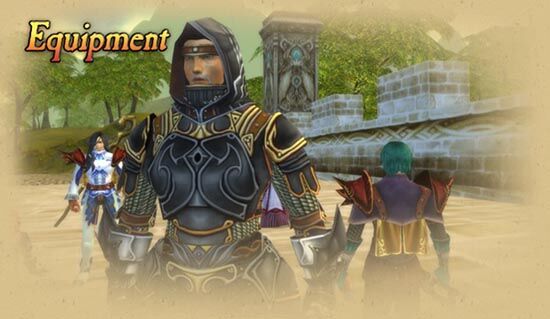 Besides a solid training, adventurers also need to be well equipped. The most important thing is adequate clothes and a good weapon to be prepared for the dangers of Taborea. But of course the different classes have individual requirements and possibilities. Armor and weapons are not the only important items for adventurers in Runes of Magic. Potions, resources for the various crafting skills and diverse fighting goods which fill the backpacks in Runes of Magic are equally important. Some items are important for quests while others are exhausted after a single use or give a benefit for a certain period of time.

There are several different slots armor goes Every class can equip armor in these slots.

Shoulders and head armor are not available to humans until higher levels, but can be obtained as quest rewards on Elven Island, the Elves' starting area.

Armor comes in four different types, cloth, leather, chain and plate, which are restricted to certain classes. Classes such as Champions and Knights have access to most types of armor (Champions can't wear plate or shields, Knights can't wear talismans), but usually choose to wear the heaviest armor possible.

In addition, all types of armor sometimes come in sets. A set will include armor that goes in several different slots, such as a helm, leggings, and body. This armor gives special bonuses for wearing multiple pieces of a set. See Item Sets.

There are many categories of weapons available for use in Runes of Magic, which, like armor types, have class restrictions.

There are (2H means the weapon is held in two hands):

When you use a weapon class, you gain levels in that class of weapon. You will miss less if your level with that weapon is high.

There are also classes of weapons, such as Gun and Spear, that do not yet exist ingame but have a bar in the weapon level tab, so they may be added later. This may point to the addition of other classes to use these weapons.

In addition to basic equipment, the heroes also have access to rings, amulets, and earring. These items do not offer any armor bonuses but contain runes and stat bonuses. Every class may wear trinkets without any restriction.

When one is well fed, they can fight much better. An adventurer who has eaten some tasty fish or bread will receive a bonus for a limited time. In addition, players may purchase magical potions from Alchemists which regenerate health or mana faster. Those are especially essential during fights. Those helpful items are of course consumed quite fast during fight intensive adventures. A regular restocking in a nearby village may be in order, but one who learns how to cook or brew potions can provide these items for themselves (Note that, with the amount ingredients required, it is often cheaper and faster to buy the potions).

Nothing lasts forever and whoever cherishes his equipment may do well to assure its durability does not drop too low, otherwise it may become unusable. A regular visit at a craftsman might be a good idea. Items have a ranking system, where high level objects are mighty but rare indeed. Some items tend to have magical properties, adding to different character attributes like wisdom, dexterity or strength or even enhanced damage, attack power and defense. Some others grant the wearer special resistances, for example protection against elements like fire or water.

Other equipment may have one or more sockets, which can be used to draw the power of runes into the item. The tier of the rune however, may not exceed the tier of the equipment. Additional bonuses may be obtained by using magical crystals which players may use on their weapons and armor. With those they can power up their items and gain beneficial attributes. This power may be added multiple times to increase the power level and even gain a glowing aura. The success, however, is not guaranteed – usually nothing happens when attempting and if one has a bad day the power level may even be lowered instead of increased.

You should also keep an eye on your items to make sure they are actually usable for your class or current level. Useless equipment and many tools which are hauled back after an adventure may be turned into sparkling coin at the merchant. One can also find auction houses in Taborea, where witty characters can sell items to other players. This would be the right place, especially for craftsmen or friends of special equipment who want to get a certain profit from their special item.

There are four ways to improve the quality of equipment.

Refined equipment will have increased damage, increased defense and extra ability stats. The name of a refined item will be followed by a "+ N", where N is a number up to 30. Items are refined by using a Refining Gem on the item.

Equipment will have a +10% power modifier for each tier above the base tier. The tier text will be green when the bonus is applied. The bonus is the same as the durability power modifier and they are added together. For example, +1 tier and over durability will be a 30% bonus instead of a 32% bonus. (Tiers can be increased by combining the item with higher-tier Mana Stones).

A runed item will have bonus stats. Runes can be added by applying a Rune to an item with an empty rune slot. Named stats, similar to those of runes, can also be added by transmuting the item with three mana stones (this is a fairly complex process, please read the article before diving in). Attached runes (and stats from mana stones) will be listed in white, orange, or green text, depending on the stats.