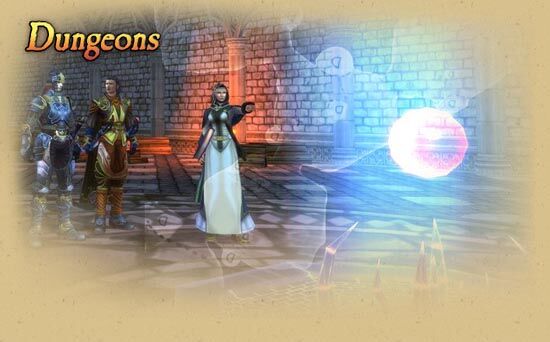 The world of Taborea consists not only of vast and varied regions, but there are literally dozens of caves and mines in Taborea, reaching deep down below the surface of the earth. In these dungeons you will not only find gremlins and goblins, but far more dangerous creatures and monsters as well.

Taborea is a continuous persistent world even extending below the surface of the earth. But there are also instanced dungeons, where parties of brave adventurers meet to complete special tasks or just to discover exciting places. Once in the dungeon, the adventurers are on their own in their battle against fierce bosses and their henchmen. Now it will show if the quest party is tactically suitable assembled and how good they have learned to cooperate. Extreme caution is advised, if the boss-mob has no level number, but displays a small crown instead. Those special bosses are extremely dangerous and many a brave soul has lost their life trying to defeat them.

There are not only static dungeons, but players will also find dynamically generated dungeons, where new monsters and treasures are randomly generated every time a player enters (so called tile-based dungeons). The dynamic cave systems are randomly generated every time players re-enter and therefore can be discovered anew again and again. If the most dangerous group of monsters waited just behind the next corner during your last visit, they surely will be somewhere else next time and will carry different loot as well. So it always pays off to drop by more often – there will always be new challenges.

For some challenges waiting in those dungeons, even the toughest group of six adventurers won't be enough, so there is only one way: form a raid group! Dozens of player’s are needed to send powerful monsters that terrorize the lands and guard vast treasures back to their maker Ayvenas. But their dark retreats are huge and they command armies of powerful followers, so even getting to those bosses will be very dangerous.

After the release there will not only be instanced raids, but also huge persistent dungeons with dozens of levels as well, which offer enough room for multiple groups of adventurers. Here, players can battle against monsters of their own strength and move on to new battlegrounds, as soon as they reach higher levels. On the hunt for more experience and treasure, explorers, combative players and shady characters can enter deep into these grottoes and sunless dungeons.

If the creatures of darkness aren't challenging enough, player groups can battle each other in special PvP dungeons.

Gates to the Dungeons[]

But not all of those dark places in Runes of Magic can be entered at all times. There are also dungeons that are only accessible at certain times – or to persons with a certain reputation or the proper mission.