see The Trials of Ayvenas

Best route from Varanas to Dasein's Labyrinth: Go to the Varanas Gates in Silverspring to use the Mysterious Palace portal (pay 250,000

We’re opening the gates to a brand-new event zone! When open, all players from level 75 can take on the challenges of Dasein’s Labyrinth!

This zone is a Shared Public Instance. All players are in the same space, so if there are other players in there with you, you might not find ANY Purple Treasure Chests, as the other players may have gotten to them first!

Who and How?[edit | edit source]

The portal can be found in Silversprings near the foot of the bridge to Varanas City. The entry fee can be paid in gold or items, but note that each time you enter on the same day, the fee will increase. The price is reset again every night around 2 AM.

After paying, you’ll be transported to the starting area (Dasein's Bunker) where you can choose either to take on the labyrinth (Dasein's Grassland), or enter the boss zone (Dasein's Volcano).

(x4 for each subsequent entry). The entry price resets at about 2am (server time). It seems the price of the next attempt only increases when you enter Dasein's Grassland (not Dasein's Volcano).

when you enter you appear in the Mysterious Bunker. There are 3 portals in this chamber, in 3 of the 4 corners. They are labeled Exit, Mysterious Volcano, and Mysterious Plains.

a.k.a. Dasein's Grassland or Mysterious Plains

Inside the labyrinth, you have 3 minutes in which to find as many treasure chests as you can. Timer starts the moment you click on the portal to enter Dasein's Grassland. The chests come in two different ‘flavors’: Purple Treasure Chests contain more valuable items than the Red Treasure Chests, but the former can only be opened using keys you find in the Red Treasure Chests. You’ll also come across Rune Traps which either

Slow you down when triggered or

Speed you up when disarmed (the Speed buff stacks up to 5 times!).

In case I was not clear, you click on the Rune Trap before you step on or past it to disarm it. Trying to step around it carefully is a losing strategy. It will trigger and slow you down. 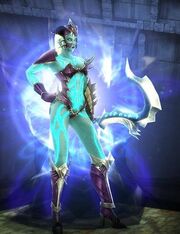 You’ll need every ounce of your strength and cunning against Dasein. Only a fool would dare face her alone – you wouldn’t stand a chance!

Once you enter the Mysterious Volcano there is no exit. The Space Crevice (which should be the exit) is blocked. Stuck Report ejected me to Silverspring but reentering Dasein's Labyrinth does not cost more than your last attempt. This is not true of actual death, however. Reentering will cost four times what you paid for the last attempt.