This page refers to content introduced in the expansion, Chapter II: The Elven Prophecy. 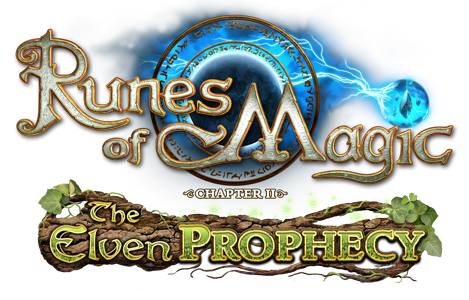 We are proud to announce Chapter II of Runes of Magic – The Elven Prophecy. During the currently running Electronic Entertainment Expo (E3) in Los Angeles Frogster already showed parts of the new content, like the new region, Weeping Coast.

As the name already suggests, one of the main elements of “Chapter II – The Elven Prophecy” will be the introduction of the Elves as a playable race. Coming along with a huge new background story, new regions and many new quests.

According to the legends, demons of human origin – having degenerated into underworld beings under the influence of the runes – forged an alliance with the nagas in ancient times. Together, these evil forces brought war and devastation to the world of Taborea. An alliance of elves and humans succeeded in banishing the demons into the void and drove back the nagas behind a magical wall called the Great Barrier. However, when elven prince "Sig'aylas" removed the holy sword "Arclight" from the wall to defend his human true-love, the wall perished and the Naga threat flared up once again.

That is not all, as there will be also two new character classes coming along with Chapter II. These two classes will add in as a perfectly addition to the already huge possibilities of the dual class system. If you are not interested in testing out a new class or race, you don’t have to worry. New challenges await all experienced players in form of challenging dungeons, raid instances as well as new PvP modes. Due to all that new content, the level cap with “Chapter II – The Elven Prophecy” will be raised for all characters to level 55.

Another new feature will be the pet system for the World of Taborea. Thanks to that feature, you’ll be able to actively train your virtual companions, so that they can help you in future battles.

Who now thinks, that this would be all, is completely wrong, as the ambience of the game will also be enhanced. The new regions in special, but also the old territories will benefit from an improved graphic engine. Sound and Music will also receive improvements by the renowned sound-studio of Dynamedion, to further extend the game experience.

Already in August, we will deliver the first contents of "The Elven Prophecy", like the new region of "Weeping Coast" and raise the level cap to level 52 with this addition to the game.

Just as the base version of Runes of Magic and all subsequent updates, we will deliver "Chapter II – The Elven Prophecy" as a free download.

there will also be a new, upcoming instance dungeon called “Heart of the Ocean” and will take place entirely underwater. Glub glub!

Release of Chapter II is planned for September in 2009!

You can get a sneak preview of Chapter II now! Check out the links below for new screenshots and trailer!

The Elven Prophecy
Welcome to the Elven Empire

For a thousand years, the Elves have been sealing themselves away in their kingdom. But since the return of the pernicious Naga to Taborea, the Elves have decided to come back and fight for freedom. They have joined forces with all other peaceable races in Taborea to wage war against the gruesome snake creatures. Only by coming together will you have what it takes to succeed against the demons.

Are you prepared to join the fray?

This category has the following 3 subcategories, out of 3 total.

Pages in category "The Elven Prophecy"