Originally introduced with the release of Chapter III: The Elder Kingdoms.

The birthday of the famous musician, Julia Habin, is coming soon, and as every year the villages are organizing musical activities to celebrate and sing the songs that Julia sang to pacify the lonely children left behind by the war in Kolydia.

It’s again that time when streets are filled with music and everyone returns to their villages to witness this wonderful show.

As usual, many activities are planned for celebrating, in particular around Silverspring and Thunderhoof Hills. The managers can be found in Varanas and Dalanis, and they will wait for you with 9 special activities. By participating you should keep the

musical notes you get, as you can later trade them for

Mobs all over Taborea seem to have been rummaging through a bard's storeroom, carrying off

Torn Scores. I am sure the Bards at Varanas would be interesting in examining these!

Pulli is willing to trade

Musical Score ×15 you can exchange them with John Bach [Music Festival Manager] in Varanas Central Plaza, or Music Festival Event Manager in Abandoned District of Dalanis, for

Julia's Package will contain ONE of the following:

Around the central fountain are floating stones with musical notes. Mousing over them will reveal that they are named for the classic scale, Do-Re-Mi-Fa-So-La-Ti-Do. Venus Garter will ask you to play her specific score. Do so by clicking the notes in sequence. On Simple Melody you can try again and again but on Difficult Melody you only get two tries (it may be a good idea to take a screenshot of the melody). She will show you the sequence, be prepared to write fast as she does not leave it up for long! This game is repeatable.

Note: The notes are NOT in order counting clockwise or widdershins! As you stand at Venus Garter and look at the fountain, From Do (first note ahead of you and on the left between 2 trees) the order, clockwise, is Do, Re, So, Fa, La, Ti, Mi, and back to Do.

If you mess up just go back to the fist note and start again. You can change the note you messed up and, with trial and error, figure out where you messed up when writing it down. There is no time limit on these tasks.

A few of the possible songs we have seen:

Each day, at 2pm, 5pm and 8pm (Pacific), large numbers of Cavies will charge Varanas Gates and the northern gate of Obsidian Stronghold. Help calm them down by slapping them around a little. After 540 Cavies and 300 Cavy Soldiers have been defeated their general will show himself. Fighting the Cavies will earn various rewards including event-specific ones like

If you cannot find the Cavies, search for Tak Piero or Hank Piero.

Recommended for 5 to 10 participants. This is a rally with 3 checkpoints and a final destination. You must use magic to fight monsters that appear along the way. Collect Sign-Up Sheets from the monsters.

You receive a Gate Keeper Certificate and have 1 minute to catch as many falling sparkling notes as you can using only the skills you are given to move. Two players can do this at the same time and both players will share in the total notes caught.

You are teleported onto the note stones by the wall. Turn your camera to look towards Armosen Lok so you can see the notes coming and so that the orientation of the Skill hotkeys matches the order of the incoming notes. Now it is just like playing Guitar Hero! Press Alt-1 to Alt-5 to move to the row of the incoming note!

Torn Score ×10 to exchange for one

Restored Score, which turns on the Gramophone.

There are 3 different scores: A solo act, A duo or trio score, and a 4-6 member team score. Bigger is harder but more rewarding.

Pulli is also willing to trade

You receive a musical instrument, such as a Magic Saxophone. Target other players and play the instrument to give them that effect (10 minute duration)! Instrument cooldown is 60 seconds.

You also are told the name of your melody of the day, such as Magic French Horn. You would need to find a player who was given a Magic French Horn and have them target you and play their instrument.If you have that instrument, you can target yourself for the update. When you get the effect, you have 10 minutes to report back to Jade Baglama before the melody fades from you.

You will be transported deep within the Forsaken Abbey. The Phantom will not attack you.

Rescue the Musical Angel 15 times to win a Title. 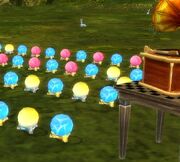 This quest chain was introduced in 2021!

Help the Black Wabbit correct the Music Pearls so that the music played by the Magical Gramophone sounds nice again.

She gives you a Magical Score with A Missing Note. Read it to figure out which note is missing. How, you ask? There will be 6 lines of melody on the Score. Just like poetry, the lines repeat at intervals. Simply find the line that is most like the broken line and that will tell you the missing note.

Find a Missing Note from a Little Note Fairy. Gelia Green (in the Abandoned District of Dalanis) may be able to give you some advice on finding them. Near Anja Lud are a number of floating Note stones. Jump from note to note until you reach the fairies and talk to them to find the missing note. They will each want an item in exchange for their note.

Gelia Green asks you for

Rare Feather ×5 from Wild Gulo and Milasso Gulo. For each 5 you bring her, she will give you one of the items the fairies crave.

Complete this task 3 times to win a title.

This quest chain was introduced in 2020!
Todd Joyce [Organizer of the Centennial Music Festival Concert] at Sternhorn

Owen Bunnel has had his eye on Todd Joyce for some time and finds his actions somewhat dubious. He wants you to look around for anything suspicious.

Note: Choosing the different dialogue options will grant the player with a different set of title and 7-day pet.

The following 83 pages are in this category, out of 83 total.