This festival was originally called the Beer Festival, probably until their lawyers told them they could not serve alcohol to minors, even in a virtual world, even though EverQuest I and II have always had alcohol in them. Just replace "Juice" with "Beer", and "Homogenized" with "Brewed", and everything makes more sense. 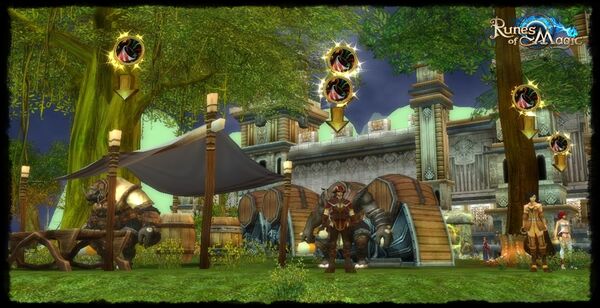 During the bustling moonlight grapefruit season, the aroma of freshly pasteurized juice fills the streets and hard-working men and women gather together to share a cold mug of juice and talk about the past year. Great juice makers' doors stand open day and night for crowds of happy revelers.

The juice celebration gets bigger and bigger every year. The Phirius Workshops have picked up on the popularity and profitability of these gatherings, and are now coordinating these folk activities and promoting them in different places. This year, Juice Festival activities are being held in every town and city and merriment fills the air, alongside the aroma of freshly made juice.

This is an Earth festival.

During this festival, the following items have a chance to drop from any monster that cons at least green to you. These should be considered rare drops.

This Instanced zone is the location of the new festival events for 2021.

Dukar Sterlin teleports you to 'The Stumbling Knight' Inn. Tell him "With pleasure! Let's go!" to be transported.

Dukar Sterlin [Juice Festival] will explain the rules of the card game to you.

At (and near) Sternhorn in Thunderhoof Hills...

Ask Bill Blake for an Empty Glass, then tap one or more of the three kegs. Each tap fills half your glass. The effect of a full glass lasts 1 hour.

Don't be so serious[]

Target a Barrel and use the Alt-1 skill to detect a hidden Kobold. When you find one, use the Alt-2 skill to smash the Barrel. Smash as many Barrels as you can before time expires.

Use the eight ingredients on the bar to make drinks. In each of three stages, serve 2 drinks.

The Job of Creating Happiness[]

Signup is 10 minutes before the start of the event. Find and click on snow-covered Juice Kegs in Varanas Lower City East and Varanas Lower City West. The target number may change? First to click on the required amount and make it back to Meryl Blake wins.

FYI: You may rent a

Server for a Day[]

Target a speaking patron and press the correct response.

Four temp skills: up arrow, down arrow, left arrow, and right arrow. You will see an arrow appear over your head. Press the corresponding arrow skill. Do it as fast as you can.

The following 88 pages are in this category, out of 88 total.