Runes of Magic Wiki
Register
Don't have an account?
Sign In
Advertisement
in: Pages with broken file links, Festivals 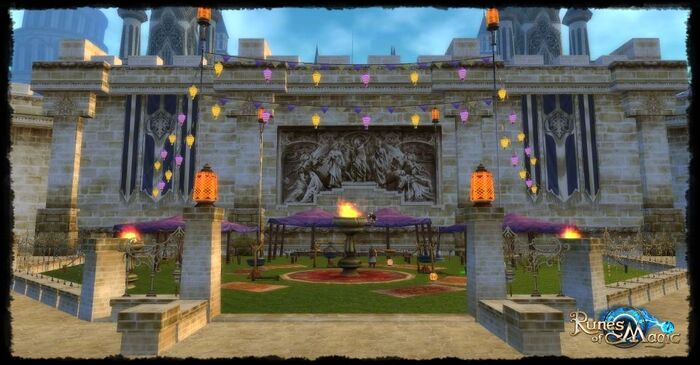 In the past, when the frost and snow fell and the moon disappeared from the sky, the Frostmoon Demon Beast Thysdyr would awaken from his sleep and cause destruction everywhere. At the time, the people had no way to stop him, so they could only flee. They would wait for Thysdyr to leave, then return to rebuild their homes. The villagers lived through this nightmare year after year, until one year at this time, a strangely-dressed traveler came to visit even though he knew the terrible beast would attack.

That night, as Thysdyr's angry roar drew nearer and nearer, the traveler sat in the empty city, quietly waiting... The next day, the villagers returned to find their village untouched. Surprised, they asked the traveler what had happened. It turns out that Thysdyr was afraid of rune-catalyzed flame. This exciting news spread quickly to all the nearby villages. After that, every time the Frostmoon Beast awoke, he could only continue to hide in the darkness.

Many years have passed, and Thysdyr hasn't been seen for a long time. But every year when the snowy season arrives, people build a giant pyre and dance around it, throwing in rune catalysts. They celebrate day and night, and call the celebration the Festival of Fire. [3]

Geo Draconaris ×10 in exchange for

Festival of Fire Voucher ×5, or trade you a

Festival of Fire Repeat Ticket for a

Roger Lincoln [Rune Researcher], on the Varanas Bridge, will also trade you a

Festival of Fire Repeat Ticket for a

Completing any of the event tasks may also award you a 1 hour Acclaim buff:

Completing some events will motivate the NPC to give you an Acclaim Buff lasting 1 hour. This is in addition to any rewards.

Rewards from this Festival may contain a Ic Capricorn Pet Crystal.

You may earn the following titles during this event.

You CAN get the needed

Festival of Fire Repeat Ticket, but you have to do all five of the following events/tasks every day:

Three new quests have been added to this festival for 2021! These 3 quests reward

Festival of Fire Voucher ×5 so you can just do this each day, or even do the above 5 plus these 3 to get

Note: If you ask Ajis where the Flame Altar is, he will offer to send you directly there.

Ostrich Meat (rare drop) (NOT the

Ostrich Tailbone Meat!) from Colorful Ostriches or Young Ostriches in Tagena, and/or

Wild Boar Meat (common drop) from Charging Boars just north of Varanas Gates or Black Boars on the north side of Maidge's Farm, in Silverspring.

Once you have the meat, use the Silverfall Fire next to Drake Gates, choose a recipe, and use the Extinguish skill to douse the flames at the right moment! You must rest 3 hours after each cooking attempt.

Hint: We strongly recommend you use 2 rows in your bags to keep the food organized so you know at a glance which foods you have and which you have yet to perfect. Every time you cook, strive to fill one of the holes.

She wants you to drive one of the Holy Flame Chariots and use it's Holy Flame to ignite 7 altars within 60 seconds.

You receive a chess piece of a certain color. Clicking on a Pure Rune Crystal will change it's color into the color of the chess piece you are holding. When 3 or more chess pieces of the same color line up your team will score. Think "Bejewelled". Diagonals work as well as straight rows or columns.

Advice when playing in a team: Agree beforehand to assign a specific color to each row or column.

Rune Traps. Use them on affected animals in Silverspring.

The higher the point value the more powders it takes to cure the target. No trap is needed for the bunnies, just cure them.

Unusual Pathogen has been found multiple times near Peerston Farm. Also seen near the Kobolds.

Hint: Drop a trap near the mob, smack it lightly (not enough to kill it! Best would be to use a debuff to anger it without doing damage!) then kite it across the trap to snare it.

You can only get

Rune Traps ×20 per task attempt. Ethan Bryce will replace your

Jane Solon [Flame of Fortune Event Organizer] at the Varanas Gates will explain the rules to you and transport you (once per day only) to the Oblivion Shrine in Tagena but you have to talk to Giselle Fred when you get there to register.

Gather near the Prayer Altar, within the swirling misty circle. As a Rune appears, click on it, then use the skill to Throw Rune to throw it into the brazier atop the Prayer Altar. This accrues points to your Score.

When the event is over, you have 30 minutes to turn in the points for your rewards.

To light a fire:

There is no transport NPC to send you to Dalanis Gates so you will need to use other means. Transport via Snoop Portal from Varanas, first to Ancient Kingdom of Rorazan and then on to Thunderhoof Hills, will cost you 4,400

Aishas Gracia tells you that they need

Ice Rune ×3 to power the device to attract Thysdyr. The devices power will only last for 5 minutes so Thysdyr must be contained within that time limit. Additional

Flame Runes will need to be used to defeat him.

The Magic Circle behind Aishas Gracia will return you to where you came from.

The confrontation takes place in a cave instance behind the waterfall (Cavern of Trials). Use

Flame Runes on the Red Device and

Ice Runes on the Blue Device to begin the encounter.

Pages in category "Festival of Fire"

The following 75 pages are in this category, out of 75 total.